We have a champion in the very first ever Cardboard Hogs contest…and it was a non-contested contest.  The Winner…wait for it…GAVIN!! from my current hometown of Portland, Oregon and writer/blogger of the very entertaining Baseball Card Breakdown blog.  I don’t believe i have your address, so it you wouldn’t mind passing me an email i’ll get something over to you that i hope you enjoy!  Not sure i’m going to make it to the show the weekend…

In case you were wondering, here are the results…along with some other stuff. 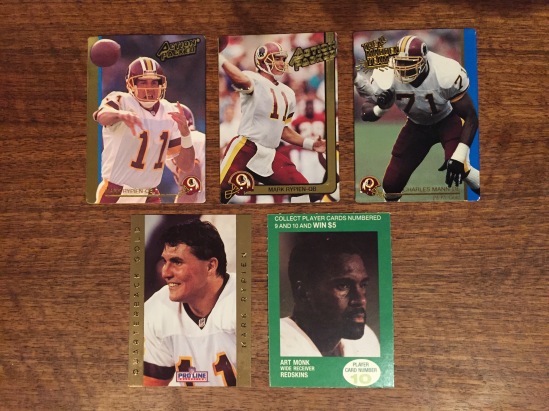 Ok, brief story on this lot.  This is the old guy, the new…old guy that had the vintage football.  Seemed nice, very chatty…but there was something odd about him.  He was a little more pushy than the other guys and was really doing a sell job on me.  Normally i don’t like that and tend to wander off when i get that kind of vibe.  I should have listened to my gut!  When i pulled this lot of cards, i handed him the stack and said my usual “what’s my damage…?”  his response was “…make me an offer!”  I offered $10 thinking that was more than enough.  $2 per card.  In fact, i thought it was a little too high…Bill probably has all of these cards in his 7 for $5 boxes.  Anyways, he LOL’d out loud and said “…the 24K gold card is $20 by itself!”.  That’s the Charles Mann card.  He could quite possibly be right, but card shows aren’t about getting top dollar for your cards. It’s about selling cards to collectors at negotiable prices that work for both parties.  I was taken back by his counter and shockingly stared at the cards for what seemed like 2 minutes before sheepishly taking out a $20 and handing it to him.  Retelling this story and reliving the moment, i’m quite upset with myself.  I tend to be a fairly generous person and don’t mind getting the lesser end of the deal if i can make someone happy…but this was just a case of me getting taken advantage of…and it pissed me off…i’m still upset that i let myself accept that offer.  I should have given him the cards back and walked off.  I will certainly skip his table next time…if he’s there again.  I can’t imagine he did much business in finding too many suckers last time. 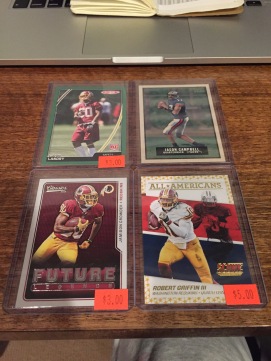 This is just some good ole’ Tom hooking me up.  His table was my third stop and more than made up for the previous door…Now, Tom has a habit of overpricing his cards and then giving you a great deal on them.  I think he does that so he an engage in conversation with the guys at the show.  When he handed me that Jamison Crowder card with a $40 sticker, i was like nah SON!  But, he smiled and said, “you know i’ll make a good deal for you.” 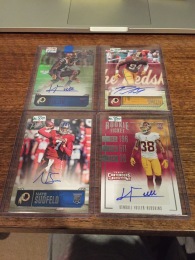 These are a few gems from Kim.  All relics or autos, most with serial numbers…and $5 more than door #1.  This is why i enjoy hitting up Kim’s table.  He has stuff set aside for me and i get great deals on them.

So, the last door was from the military vet.  This is another guy that over prices his cards with the label, but is more than happy to negotiate a deal quickly and easily.  He’s the autograph guy that is more interested in moving things than keeping them.  I had offered him $15 for the lot and was scrambling around for a $5 to go with my $10 and he said “…$10 is fine…”  That’s how you treat a customer at a mall show i say!!

So there you have it kids.  Don’t let people take advantage of you and do not hesitate to negotiate…don’t be a sucker like me!

Today is the first day of spring and my mid year birthday…tomorrow is my son’s…kinda cool that we basically share birthdays.  So, in honor of none of that…here’s a video from a TEDx conference in Wisconsin by Michael Ford…very cool connection of Hip Hop and Architecture.  Check it out.

When i was in elementary school, my grandma would pick me up after class.  Sometimes we’d head straight to the house and other times we would make a pit stop for a snack or late lunch.  Her favorite spot was the Sonic in Schertz.  It was one of those older drive ins, and like they still do today, they would bring the food out to your car…sometimes in roller skates!  These were great times, simpler times…easier times.

My grandma was a TV freak and had to watch all of her shows.  This was before she had a VCR, so we’d have to get through those burgers, fries and shakes quickly so we could get home to watch Monty Hall and Let’s make a Deal on the tele.  Grandma was from England. I loved the show, not so much because of the premise of choosing some random “prize” behind doors 1, 2 or 3, but because of the wacky ass outfits the people wore.  Granny enjoyed the show because she liked to go on ‘winning streaks’ of picking the right door…again, simpler times back then.  If you are unaware of the show, you should definitely check it out.  It’s like a three card molly scam where nobody really walks away a winner…why are they dressed like that!

So, that brings me to some cards…the last show i went to, unplanned, i stopped by a new guys table and chatted him up a bit.  He seemed like a nice older guy and kinda reminded me of my grandpops.  Had a similar look from what i could cobble together from my cloudy memory…it’s been 25 years since he passed.  There was something about the guy that made me want to hang out.  I began to sift through his cards and was pleased to see that he had some odd ball cards and a ton of vintage football stuff…mostly 49ers though.  Since most of his collection was 49ers, i didn’t get too many cards but was able to pick out a few i needed for my master collection.

Next stop was Tom’s table.  Tom was my original go-to guy at the show…it’s been close to 8 years since i first met him.  He works at Check out my Cards during the week and does the shows on the weekends.  He’s really helped me through the years with filling out some Heritage set needs, plus he’s a great guy to talk to.  Here’s what i picked up from his table at the last show.

Next table for some Redskins cards.  My new go-to guy, Kim.  Kim is great.  He’s always incredibly nice and friendly as well.  Plus he always has way too many cards for me to sort through with incredible deals.  He tends to deal more with the big hits and pricier cards but always comes through with a great deal.  Here’s what i got from Kim.

Last stop.  Last door.  The veteran Marine autograph guy.  Not too sure about this dude.  Seems friendly…maybe not.  Has a ton of autographs from people of all walks of life.  Chasing famous people for autographs isn’t really my thing, but it’s always cool to see what he has.  Sometimes he has a nice new lot of cards that i can sort through…most of the time i end up passing his table without picking anything up, but today i got a few autograph cards.  (i know, i know…it’s supposed to be three doors, but just roll with me on this.)

Here’s the deal, i’m going to do a bit of a game…or a contest as the kids say.  The first person to correctly guess the cost of each lot will win a nice little gift pack of their favorite team from my collection.  Closest to the correct answers win, along with some kind of tie breaker i guess. 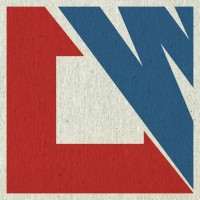